This package will be prepared and shipped by us, a team that were going to the jailhouse during the 1997-2001 period.

All bands started somewhere, be it at a loft party , pizza shop or The Jailhouse Rock Cafe . It was live music that kept , the soul of youth from dying in factory jobs. Here in the book is a small collection of posters and pictures of young bands that started a career in music.

Rock ‘N’Roll Punk Ska , Grindcore. the many subcultures of music has been captured and collected  in the art form of Show Posters. Every poster picture has been carefully documented for historical reference. Also compiled for the joy of the past and to show what a pencil, drumsticks and 4 chords can do.

Tucked just west of the Main on Mont-Royal Avenue, the Jailhouse played host to thousands of live shows during a 13-year run as a go-to performance hall welcoming almost anyone from local bands to foreign guests. What made the space a success, though, were the booze-soaked fans they drew into the small shambles of a rock ’n’ roll loveshack, a place its devotees and regulars called home.

A little seedy, a lot loud, kinda ugly but pretty fuckin’ hot, the chaos of the Jailhouse Rock Café has now been captured in time with a book of posters and notes from the underground, lovingly arranged over the past half-decade by one-time owner of the club and old-school scene superintendent Domenic Castelli.

Because you would already pay that amount of shipping for the book only, getting the t-shirt or hoodie is a way to make your money’s worth. 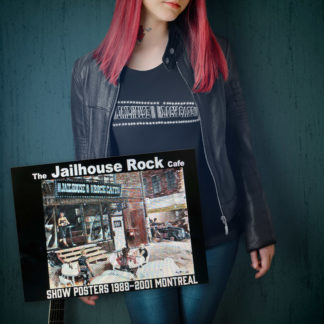